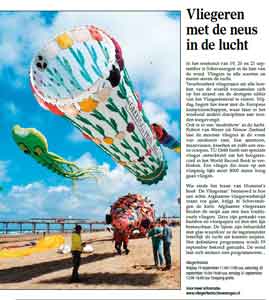 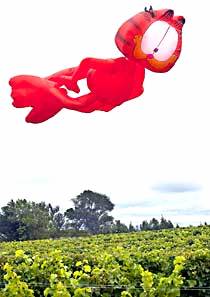 Kites
When the grape-gobbling birds got too prolific and too cunning, Hunter’s Winery put down the shotguns and resorted to unconventional scaring tactics. They brought in a big cat to keep the birds away.  “He’s been fantastic. There’s been no sign of any birds,” explained Hunter’s viticulturist Tim Crawford.

While home-grown, this is not just your garden variety of big cat. At 10m long, brightly coloured and inflatable, this cat is one of a kind. The Garfield kite wasdesigned and built by Marlborough kitemaker and Hunter’s chef Robert van Weers.

Yesterday afternoon was his first tour of duty above the rows of vines. And his hunting prowess turned out to be more than just hot air – flailing arms and legs quickly terrified the birds from the maturing grapes. With the pinot meunier due to be harvested today, Garfield was performing the final vigil over the unnetted grapes.

In 20 years of kitemaking, Mr van Weers said Garfield was his best kite yet.

Finished just weeks ago, the inflatable Garfield took two months of working four hours a day to design and build.  For the basic proportions Mr van Weers put a grid scale on a cartoon drawing of the cat. But the finer details were a matter of trial and error. “Working with flat kites is so easy compared to 3D. I must have made about five or six different feet, blowing them up with my wife’s hairdryer and looking at the shape.

“I must have read 400 comics. I needed to know what he looked like from behind. Only one drawing showed his back.”

Made from 80m of ripstop nylon, the ultimate birdscarer does not come cheap. Just the materials set Mr van Weers back about $1500.  Not content just to be the top cat of the vines, Garfield will also travel to Wanganui at Easter for the annual festival of the New Zealand Kitefliers Association.

Mr van Weers is quietly confident he will take out top honours at the event. In the meantime the big cat will continue his duties as official bird scarer on a part time basis.

Mr Crawford expected more conventional scaring tactics would be used for another 10 days to two weeks, with the pinot noir, chardonnay and sauvignon blanc grapes due to be harvested after that time. By some unlikely coincidence, Mr Crawford’s middle name happens to be Garfield. “I think I had it first, or my father and grandfather did,” he explained.