AFS Pupils Exchanged (februari 1974)
As part of a nationwide program, the Vallejo Chapter of the American Field Service has announced that Mark van Wersch, an AFS student living in Vallejo and attending Hogan High School, is spending this week visiting with another family and attending another high school in Northern-California.
Mark’s host family is Mr. and Mrs. Andrew Marshall of Lafayette and he will attend Acalanes High School.
In addition, the Vallejo Chapter welcomes  from Sacramento Miss Rosa Racio, who will attend Vallejo while Mark is away.

Going Home (juni 1974)
Nineteen-year-old Mark Van Wersch of the Netherlands, an exchange student at Hogan High School, is leaving for home today after what he says has been “a great year in Vallelo”.

It’s been “great” for Mark in more ways than one. He’s taking his girlfriend, Connie Alicata, also 19, back with him and she hopes to get a job in his home city Maastricht.

Young Van Wersch told “It’s Rich” he wished to express his thanks to the Charles McDonald family, 100 Shelly Dr. with whom he has lived for the past year.

“They’re wonderful people and treated me like a son,” Mark said. “I have enjoyed making many friends at Hogan and in the Vallejo community.”

He plans to enroll at the University of Amsterdam and may major in Dutch Literature, with hopes eventually of following a career in journalism or in teaching.

As for Miss Alicata, she says she’s interested in seeing Holland and other parts of Europe. She is the daughter of Mr. and Mrs. Sam Alicata of 826 Cedar St.

As for the romantic side, they agree that marriage is not planed, at least in the immediate future. 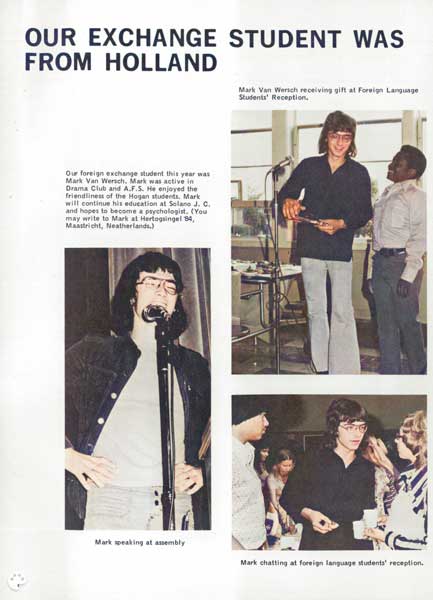 Our foreign exchange student this year was Mark Van Wersch. Mark was active in Drama Club and A.F.S. He enjoyed the friendliness of the Hogan student. Mark will continue his education at Solano J.C. and hopes to become a psychologist.