Jacques van Wersch has spent the majority of the last ten years in Taiwan, but it was in Glendale, Ariz., of all places, that he met one of the editors in a video production course.

Jacques is a good director, and a good story teller. He told many a traveler’s tale while yours truly was on a video editing suite executing Jacque’s demands. Firm but fair as a director on a small production (no small feat, as anyone who has done similar work knows), and fun and intelligent as well—c’est Jacques.
We asked him to share his thoughts on his traveling lifestyle.

What were you doing before Taiwan?
I had been teaching on a substitute basis in Toronto. A few years earlier, I had completed my first round-the-world trip and had intended to stop in Taiwan to teach English for a while.

Other forces were at work that caused Plan A to fall through, but in the end—based on the couple of weeks I spent here—I decided to get a teaching degree. That, in a nutshell is how I ended up teaching in Toronto.

“I was approached by the Yunnan Television Network to be the lead male actor in a television movie called “Allen in Dali”. 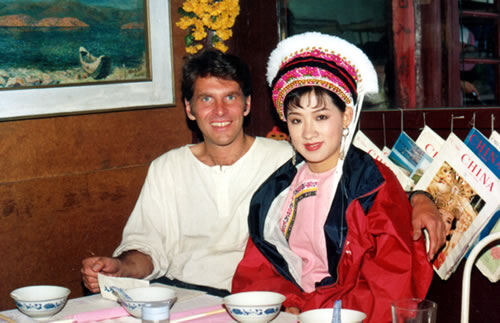 What made you decide to move there?
Firstly, I was greatly enamored by the chaos I saw in Asia as I skipped from Nepal to Hong Kong and finally to Taipei on that first trip. The main other force that caused me to leave prematurely the first time was a newlywed wife who did not share my enthusiasm for teaching in the “stinking, polluted city” that she saw Taipei to be. To be fair, Taipei was a stinking, polluted city—but it was also interesting and vibrant and oh-so-different from Toronto.

Secondly, my marriage fell apart. Since I didn’t have a permanent teaching position, I thought immediately of fleeing and since I had only a modicum of savings, Asia was a natural choice. I decided pick up where I had left off in Taiwan—sans épouse. But at the time, I chose to move to Taichung rather than Taipei—as I thought it might be a bit less polluted.

A boatman on Amarapura Lake, 12 kilometers from Mandalay. Amarapura was briefly a capital of Burma in the 19th Century. The U Bein Bridge, the longest bridge in Myanmar, is visible in the background. The 1.2 km bridge is made using teak planks.

Was it your plan to stay? If not, what was your plan?
I planned to stick around for several months—long enough to earn a hunk of cash to use while traveling, and then maybe to return to Taiwan and do the same thing, or maybe to follow the same pattern in Japan, or some other place. I expected to be bumming around like that for a good while.

I remember going to Hong Kong to pick up my first resident visa (this is something you had to leave the country to accomplish back in those days) and I met a woman who had been at this kind of lifestyle for some time. She told me then that I was “ruined for life” and I believed her. At least I imagined I would kick around Asia for at least a decade. That was a decade ago.

How was it when you first showed up?
I remember that my Quebecois buddy who had lived in Taichung described the place in glowing terms (think rural Asia, here), so I was expecting something laid back. My first impression while riding through the city on the airport bus was, “I can’t believe I left Toronto for this hole.”

The main discernable difference between Taichung and Taipei was there were fewer boulevards. It was all fairly narrow streets jammed with cars, trucks, buses and scooters. Mostly scooters. And there was no concept of a sidewalk in a Western sense. I remember that made a big impact on me my first day there.

I think I decided that almost everything I was seeing was “charming” when I got my first roll of photos back. I thought I would document in black and white how ugly the place was and I discovered that all the photos looked cool.

I came up with a pseudo-brand called RealTaiwan and sent them away as RealTaiwan postcards—practically the whole roll. And everybody who got one said the same thing: Wow, that looks amazing.

I drew a photo of a palm tree over a trash bin and wrote “RealTaiwan” on the back of each photo and sent them like postcards. That’s as far as the “brand” went. Later, I called my website ReelTaiwan for fairly obvious reasons.

There were fewer Westerners back then, and locals were much more likely to point, stare and somewhat stupidly say “foreigner” or “American” … or the Chinese-language equivalents of “big nose” or “sharp nose.” It didn’t bother me.

Was it hard to get a job?
Getting a job was not difficult. I think I signed a contract after searching for three days. I didn’t really have much to live on, so I probably jumped the gun. I would have done better to have waited a week or so for something better to turn up.

You have to remember that I was a certified teacher, so I could have had my pick of jobs … and I had pedagogical ideas of my own, so I was fairly disillusioned to wind up in a job where they expected me to teach in a purely rote manner.

I had wanted to speak well enough to function in as short a time as possible, so I went with a tutor that was recommended by one of my flat mates for a few hours a week. I turned out to be a phenomenal student of Mandarin Chinese.

It was the characters that got me hooked. Within weeks, I altered my original goal from basic proficiency to wanting to be able to read a newspaper. For the first eight months, I kept my teaching hours down below 20 hours per week and spent about double that studying on my own at home.

I was able to read a newspaper pretty fluently within a year and a half. After three years, I was working as a translator. So you could say I’m fluent.

Nevertheless, there’s another level: classical Chinese. I haven’t taken the leap yet. It’s a whole other world and many a sinologist will tell you that you can’t really know the language unless you know classical Chinese. So you can say that there’s room for improvement.

What are you doing right now for a living?
I’m a national anchorman at the English-language radio station here, ICRT.

What are you doing now, in your life, for fulfillment?
Fulfillment? I don’t know about that. I have a few pastimes. I dabble in amateur digital video production. I enjoy a hike or a bike ride in Taipei’s convenient and surprisingly … ur, well, “charming” hills.

I go out inline skating and am always on the cusp of getting back into roller hockey. I am Canadian, after all. I just picked up the guitar again, and am in the process of relearning the basics.

What has traveling/living in Taiwan brought you?
Traveling (and living in Taiwan to a certain extent) has brought me out of balance. I’m always sort of off-kilter and not really knowing what’s going to happen next, and I’m comfortable with that.

You’ve used it as a base for trips around Asia, right? Where have you gone?
My first trip out of Taiwan as a launching pad took me to Bangkok, India, Tibet, and China. Okay, I know Tibet is in China, but still … In other trips, I’ve been to Vietnam, Cambodia, Laos, Burma (Myanmar), and the Philippines. 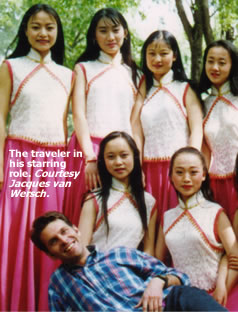 Any favorite places, good stories?
There are lots of stories I could share. I can’t say the following is my favorite, but I relive it every time I watch this movie that I starred in, so it’s pretty vivid.

You see, I lived in Kun-ming (Yunnan, China) for a while and I was approached by the Yunnan Television Network to be the lead male actor in a television movie called “Allen in Dali.” [See picture on first page.] I played the American Allen opposite a budding actress from Harbin, who played a Pai maiden [one of the 26 ethnic groups in the Yunnan province].

Needless to say, I (Allen) fell in love with the Pai girl, who was clad in full traditional ethnic dress, on first sight and followed her to a place she described as a “Shangri-La.”

A lot of stuff happens in between, but I end up singing “O Sole Mio” to try to win her love in a bizarre song-and-dance number at the end. We spent a month shooting the feature-length movie with a crew of 30. They treated me with kid gloves, albeit in fairly rustic surroundings, (I said Shangri-La, not the Shangri-La Hotel) so I felt like a privileged family member. I have never been so close to so many Chinese people at one time since.

This would be a special memory even if I were a professional actor. But of course, I hadn’t any acting experience since high school. They were desperate with only two weeks to filming and I spoke Chinese acceptably, and more or less fit the bill physically. So the entire experience was a lark. And they have played it a few times to the entire TV-viewing public in China. That’s several hundred million people with the opportunity to watch my movie.

Any plans to try something else soon?
As of early November, Taiwan has a new diplomatic ally: Kiribati. As soon as I saw this news, I told myself that I had to go there. Nothing’s set in stone, but it seems like a good destination for a four or five-day jaunt. Of course I can collect some sound and produce a piece for radio–and write a newspaper or magazine piece as well so it might be a bit of a working vacation.

That would make it all the more interesting. I mean who knows anything about Kiribati, other than it’s a largish equatorial archipelago just south of the Marshall Islands (another Taiwanese ally; there are 27 in total and would be 28 if our good friend Charles Taylor hadn’t been kicked out of Liberia) with a population of 99,000 residents, some of whom have been known to wear grass skirts?

What advice would you give someone who wants to go to Taiwan?
I would recommend the experience of teaching somewhere in Asia in order to have a springboard to the rest of Asia to anyone who’s a least a bit of an adventurer. Still, anyone with the wherewithal to pick up a teaching job in Taiwan or Japan is probably in a good position to make a bit of extra cash before setting off on their adventure, just in case they want to get themselves out of a situation they would otherwise feel trapped in.

If I had to do it over again, I would give myself the luxury of an extra few thousand dollars as a buffer when starting out.

Oh, and if you wander into a cavern anywhere in the world, make sure you have extra batteries, lighters, matches, etc. before getting beyond view of the cave entrance. 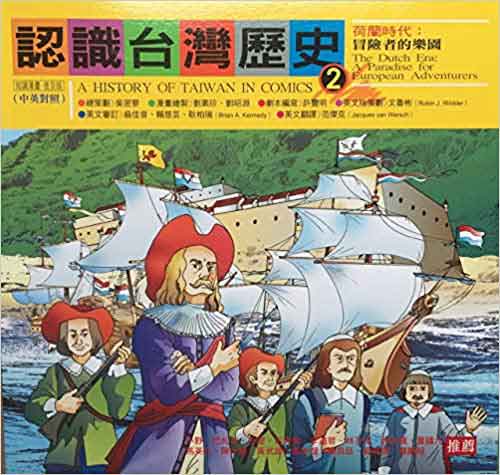